I finished one book recently, that I believe is a pretty bad one. It’s a wonder how it’s possible to take such an exciting topic as videogames and turn it into an incredibly flat piece of a book filled with unneeded information and uninspiring stories of dull people making business instead of creators that are the main force behind any kind of progress and innovation.

Though I greatly disliked the book and don’t recommend anyone to spend time reading it, a few thoughts never left my brain while listening to it.

By boring I mean those people who like how stuff was back in the old days and are not able or are not willing to adapt to the new realities. By boring people I mean those who are not able to get excited from changes - is it a new piece of technology or new use of something old. By boring I mean people who want everything to be stable until they die - most probably because otherwise they will go insane.

This book has a fair amount of cases of such people. They didn’t believe that videogames could be something that the whole of humanity will be hooked on, or that there could be something more interesting than “television” or “just playing baseball”. Big boring business people that didn’t get even the concept of videogame and refused to fund those projects - “but wait, if the whole box is this small, where will you put the wires?”.

As a software developer, I’m in the industry for 10 years now, and my worst experiences were with that kind of people. Conservative, unbelieving, not able to adopt new approaches or adjust existing ones. The sad part is that it’s not age-related in any case. I have seen young people being like that. I have seen old people being like that. It seems that it’s more of a lifestyle. I’m happy that they are far away now.

Boring people kill progress because they are afraid that it will kill them in return. It’s hard to not be afraid when your life is in danger.

Please, PLEASE, don’t be one of them! 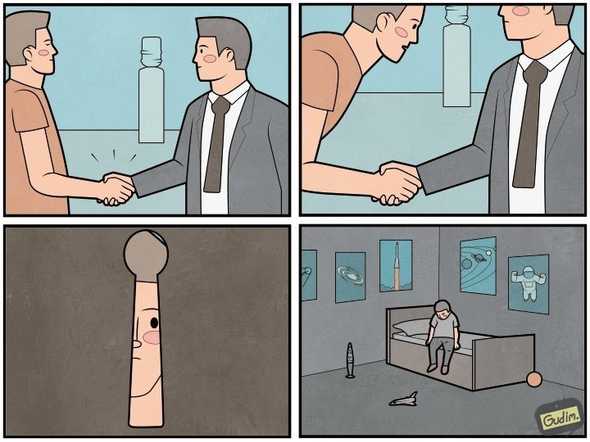 As a “weird” coincidence, those people tend do be describable by this amazing comic by Gudim

Again, the book had a bunch of samples of those people as well. These were the people that pioneered the videogame industry by challenging themselves and others, by pushing technology forward, and, what is the most important, by not listening to the boring people. Bold people are the reason why we are still able to enjoy videogames, and it’s the biggest modern media nowadays.

As a software developer, my best experiences were with that kind of people as well. Open-minded, excited, always trying out new approaches and iterating over existing ones to find the best way to move forward. I have seen young people being like that. I have seen old people being like that. It seems that it’s more of a lifestyle. I’m happy that I’m surrounded by that kind of people right now.

Bold people do progress because they know progress will do them better in return. It’s hard to stop as soon as you realize this.

Please, PLEASE, be one of them!